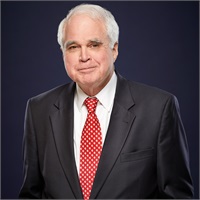 Ted was born and raised in Birmingham, Alabama. He joined Lakeview Capital Partners after having been associated since 1999 with Morgan Stanley Wealth Management and its predecessor companies as a financial advisor in LaGrange, Georgia.

After graduating from Vanderbilt University in 1961, Ted joined the Morgan Guaranty Trust Company of New York. For five years in the 1980s, he worked as an Investment Banker for First Boston Corporation and Printon Kane & Co. From 1988 to 1994, he was Chief Investment Officer of the First Commerce Corporation – a five-bank Louisiana holding company. From 1995 to 1998, Ted served on the staff of the House Banking Committee in Washington, D.C.

Ted is a former Trustee of LaGrange College, a former Director of the Community Foundation of the Chattahoochee Valley, and a former Director of DASH – a housing and community renewal effort in LaGrange. He was the founder of Big Brothers Big Sisters in Troup County, an active member of the LaGrange Rotary Club, and an Elder (2000 -2003) of The First Presbyterian Church of LaGrange. Ted loves doing the best possible job for his clients and making a difference in the community.

Quote to live by: “Make do and do without.” – Boyd K. Packer